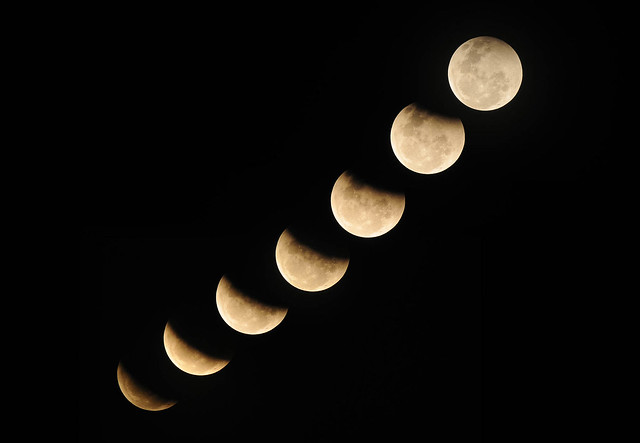 Composite image of the lunar eclipse on 3 Apr 2015 as the moon emerges from totality.

The lunar eclipse on 4 Apr 2015 is the third of a series of four—called a tetrad—consecutive eclipses spaced six months apart. It was also the shortest, lasting barely 5 minutes at its peak.

I staked out at the Esplanade Bridge an hour before totality and waited. Nightfall came, I don’t see the moon. I waited some more. Still nothing. I posted a message on Facebook to see if anyone else saw anything, nobody did. Totality, which is supposed to be at 8pm, came and went but I still don’t see it.

Singapore is really not a very good place to observe astrological events. Last year, two Supermoons eluded me because of cloud cover. I also missed last year’s blood moon at its totality, but was lucky enough to catch the moon coming out of eclipse. This time round was no exception.

After half an hour, I gave up and walked to Raffles City to have a drink. I checked Facebook once again to see if anyone has caught sight of the moon, and that was when I saw that a friend has caught the crescent moon and tagged me in her post.

Finishing my drink, I dashed out walked back towards the Esplanade Bridge. I couldn’t see the moon along the way, but I kept my hopes up. Halfway through, I decided to go to the rooftop at the Esplanade Theatres by the Bay instead as it’s nearer.

I looked up the sky as I walked onto the rooftop terrace. Lo and behold, there it is, a sliver the crescent moon peeking out of the clouds like the smile of a shy girl. I quickly setup my camera and tripod and took photos as the eclipse progressed. I was lucky enough to have a Nikon AF-S 300mm f/4 PF lens which I got for a review. Combined with my lunar camera of choice, the good old Nikon V1, I was able to achieve an effective focal length of 810mm with the V1’s 2.7x focal length multiplier. This lets me get a decently sized moon in my shots. I set the White Balance to “Sunlight” instead of “Auto” as the latter usually results in a whitish moon. Here’s the crescent moon as it emerges from totality. 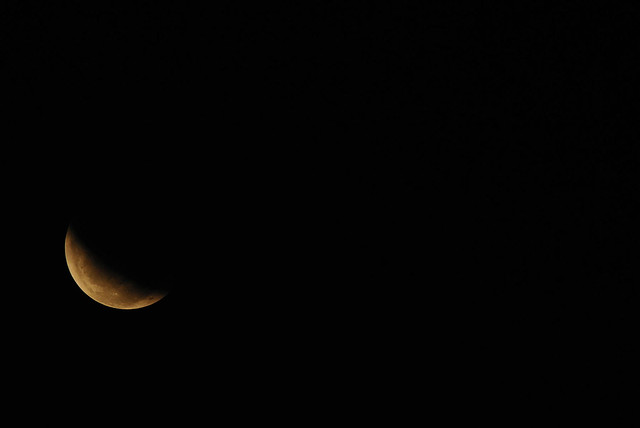 The crescent moon as it emerges from totality.

The height of the moon at this time also meant that I can no longer have any usable foreground interest, so after shooting, I used PhotoShop to composite them onto a single frame. Unlike some other photographers, or should I say, digital artists, I decided not to also composite the sequence into a landscape. I have also left the colour as it was originally, instead of making it more reddish since the reddish tinge only occurred during totality, which was already over. I have thus called it “bloodless” in this post as it was no longer reddish when I caught it.

Many thanks to my friend, Belinda Tan, for giving me the heads up on the first sighting of the moon. Hopefully, the weather will be better at the next astronomical event.