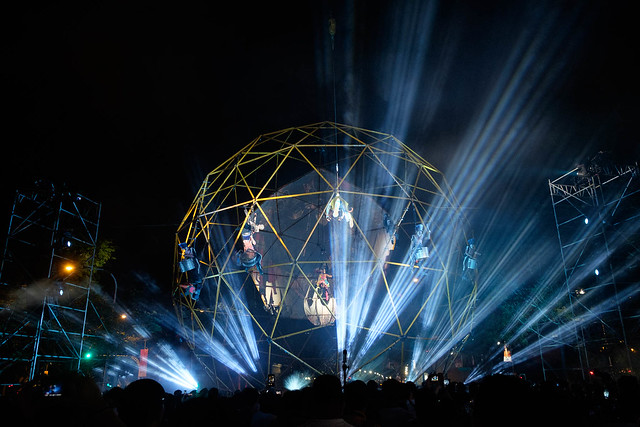 The Globe by Close Act Theatre

The tenth edition of the popular Singapore Night Festival ended on 26 Aug 2017, with the highlight show being The Globe by Close Act Theatre. The Dutch theatre group has also performed at the 2016 Night Festival, wowing audiences with their two performance titled Let’s Celebrate, and Invasion, the latter of which featured dinosaurs and other prehistoric creatures. 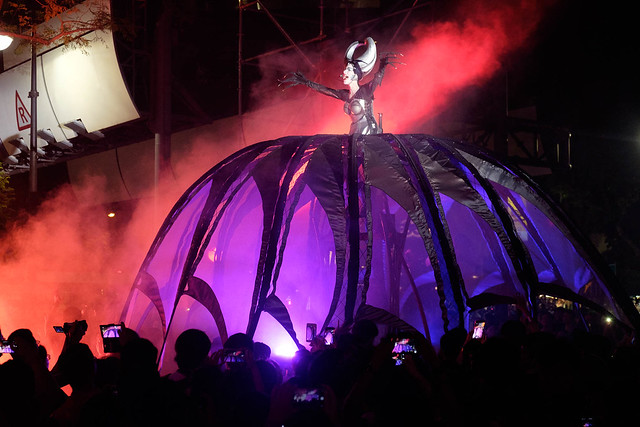 The Globe is performed at Cathay Green, right in front of the Cathay Theatre near the end of Orchard Road. It centres around a hollow globe (hence the name) and features performers on stilts who rove around the audience. It visualises the art of liberty and proves flying as supreme happiness.The spectacle shows the childlike imagination as instrument to enables one to fly. 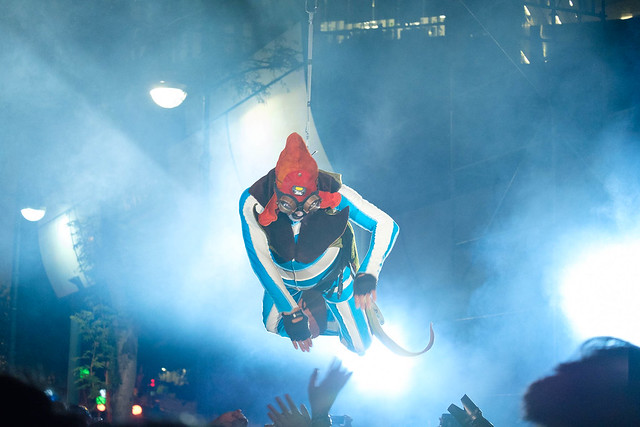 One of the performers “flying” above the audience

As I had anticipated shooting both wide and tele and didn’t want to waste time switching lenses, I brought along both my Fujifilm X-T1 and X-T2 cameras. One has a XC 50-230mm f/4.5-6.7 while the other had the XF 18-55mm f/2.8-4 kit zoom. I shot both cameras at ISO 3200, and despite being a rather “slow” lens, the 50-230mm performed surprisingly well as the performance is very well lit. I shan’t bore you with more words, so here are some more photos from the performance. 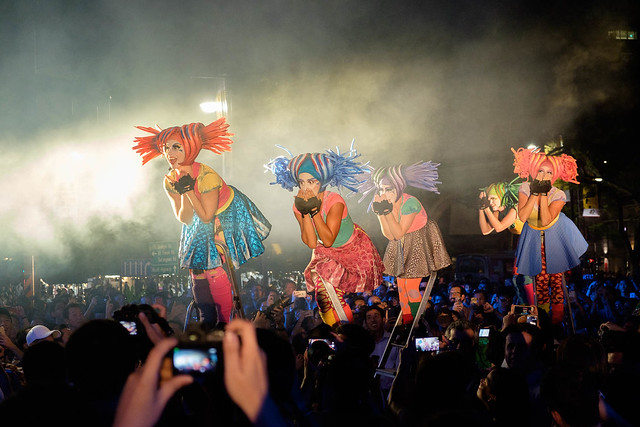 Performers mingling with the audience 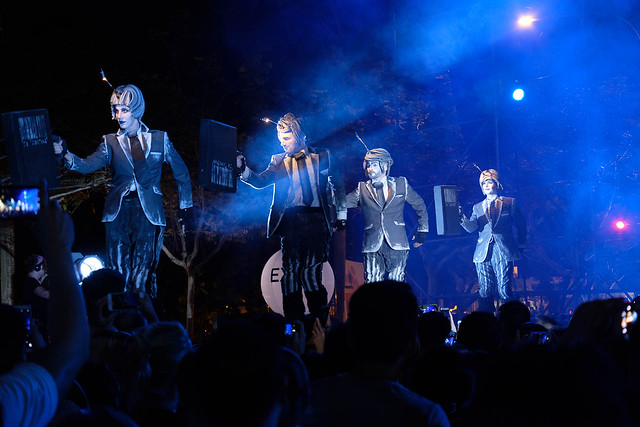 Performers on stilts (not quite visible) 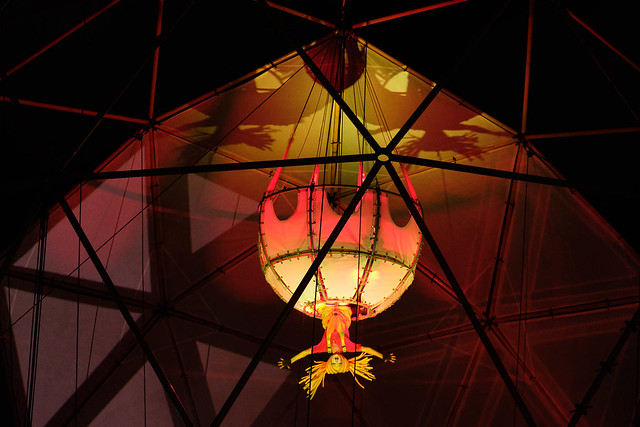 Suspended “kid” in the globe 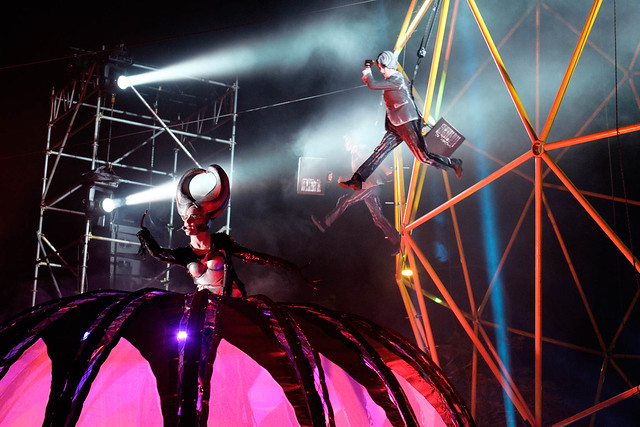 The villainess in front of the globe, with other performers on the globe appearing to give her a good kick. 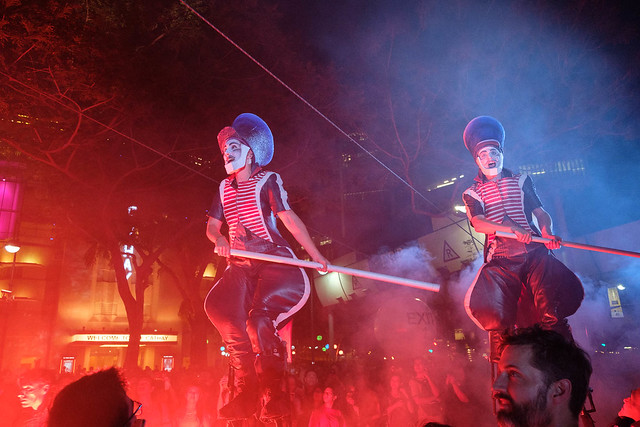 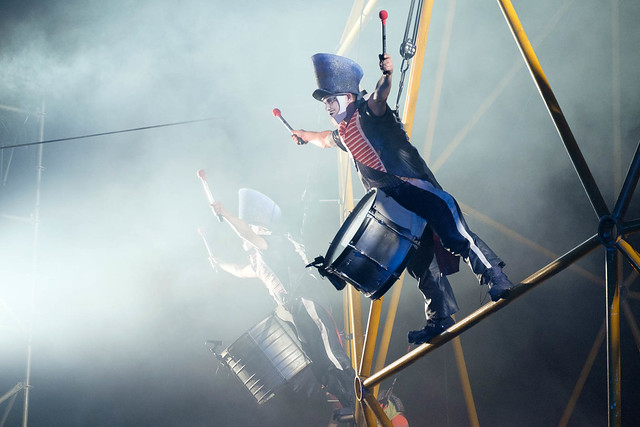 Drummers hanging off the globe. 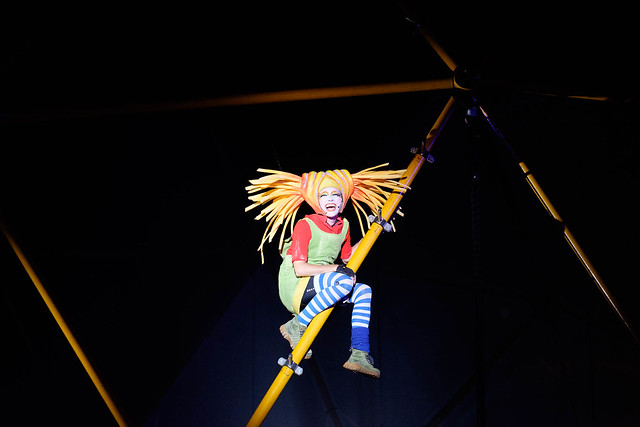 The kid character is happy that the villainess is gone. 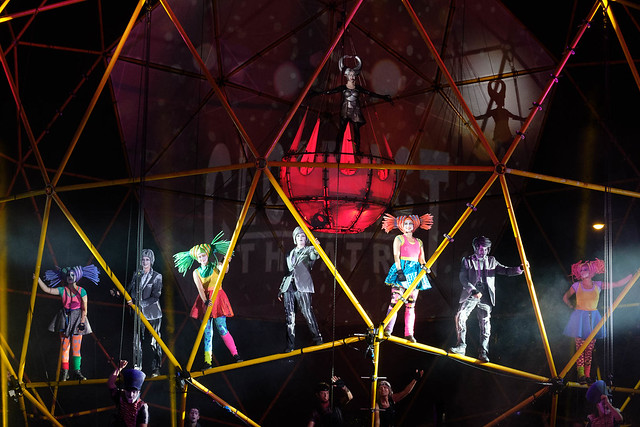 (Some of) the cast of The Globe by Close Act Theatre.

Ever since I started shooting the Night Festival 5 years ago, digital mapping projection is a mainstay in all other editions. The tenth edition is no exception, featuring a projection piece by EZ3kiel from France, set to an earworm-inducing sound track. The piece was projected onto the façade of the National Museum of Singapore. 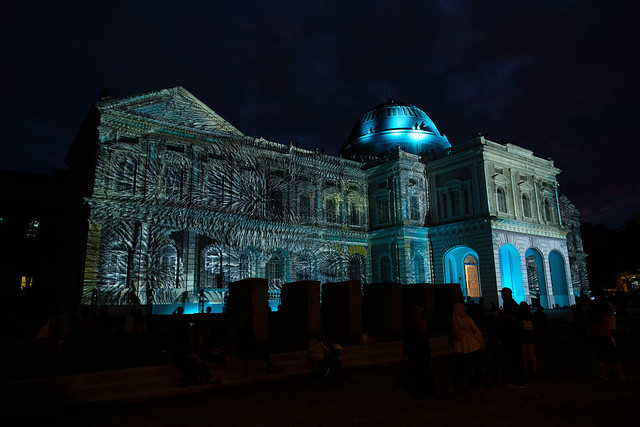 Convolutions by EZ3Kiel (France) This is the first time I saw the dome of the National Museum being lit up. 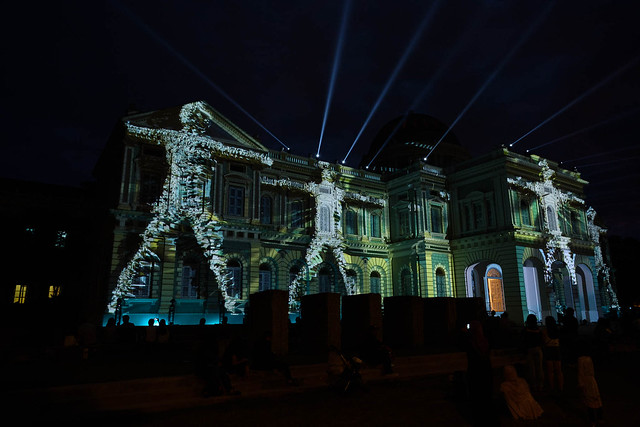 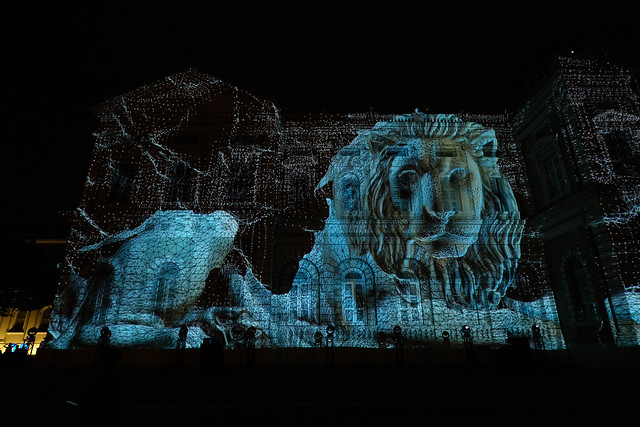 The front of the museum is really wide, I can hardly capture it with my XF 10-24mm lens which is equivalent to 15mm in full frame. Local photographer Darren Soh managed to capture the entire façade using a 10mm full-frame lens, though. 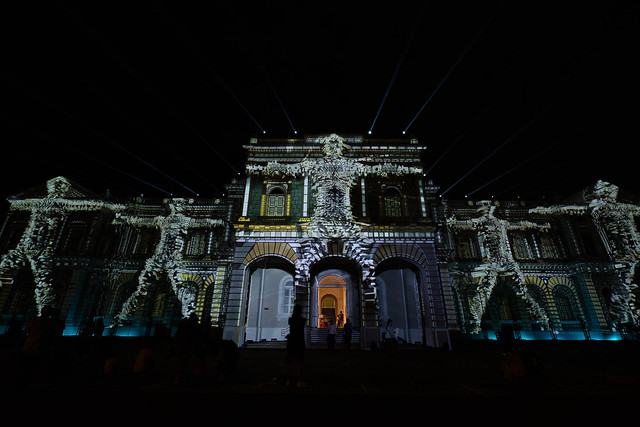 Another view of the standing men scene, from the front of the National Museum. 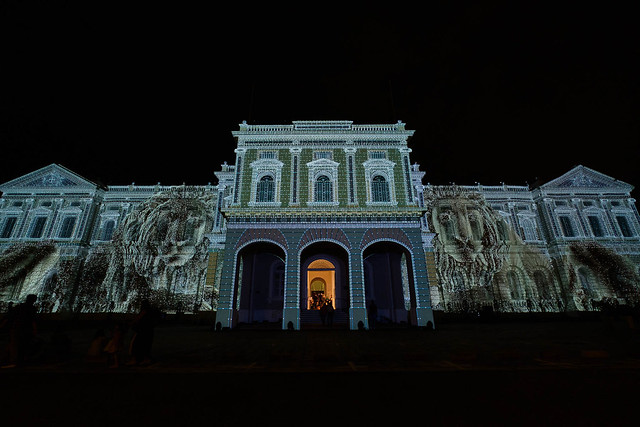 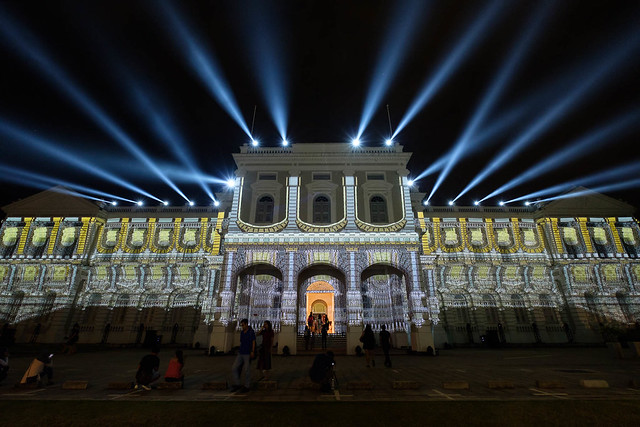 I also recorded a video of the entire thing, splicing together 2 different angles. Unfortunately, I did not bring along a tripod so it’s kind of shaky. This is also the first time I tried out “multi-cam” video.

Over at the National Design Centre is an installation named Phosphene, by Praxis+. Like last year, there is a long queue to view the installation. Mine took about 45 minutes. This is a tunnel of colourful LEDs which visitors can walk through. 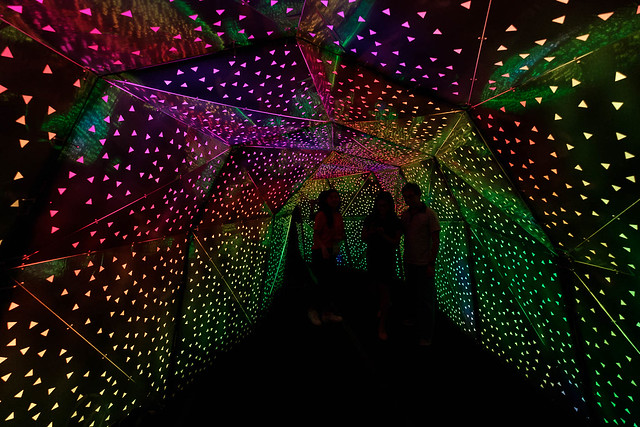 Local performance group made an appearance again in the Night Festival, this time with a bamboo dome with a tessellated fabric roof resembling the flower of life. Inside the dome are several geometrically-arranged convex mirrors that form dynamic reflections of visitors as they walk through the dome. 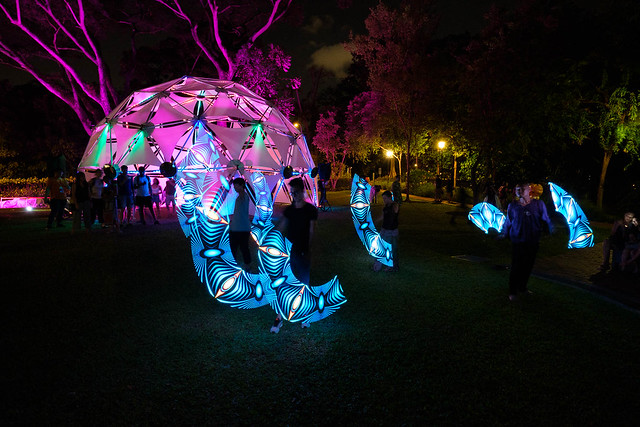 Starlight Alchemy performers playing with their LED rods in front of their installation.

Starlight Alchemy is known for their fire and LED performances, and I am lucky enough to catch them practising with their LED rods when I visited. 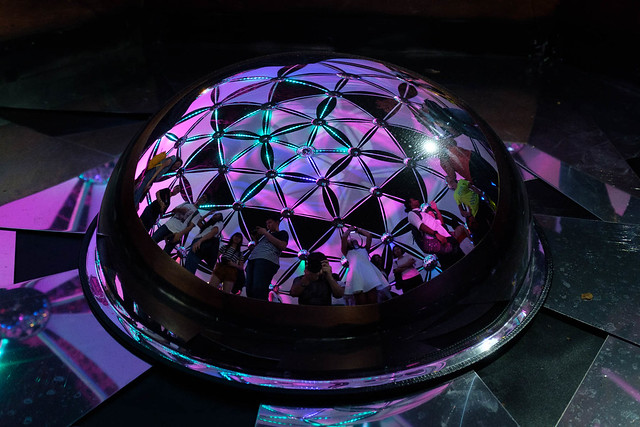 A convex dome inside the middle of the installation. 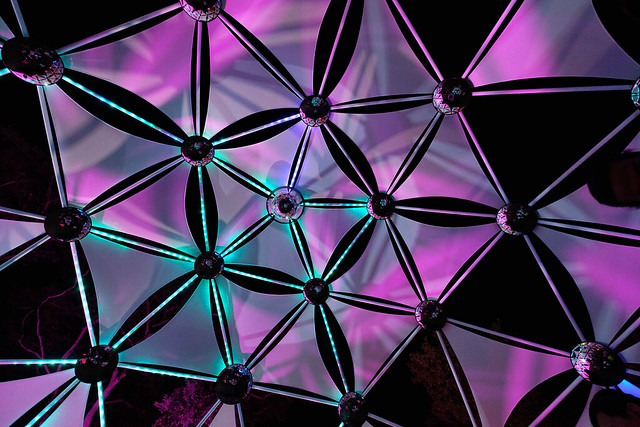 It’s been a blast attending the tenth edition of the Night Festival. Can’t wait for the next one!