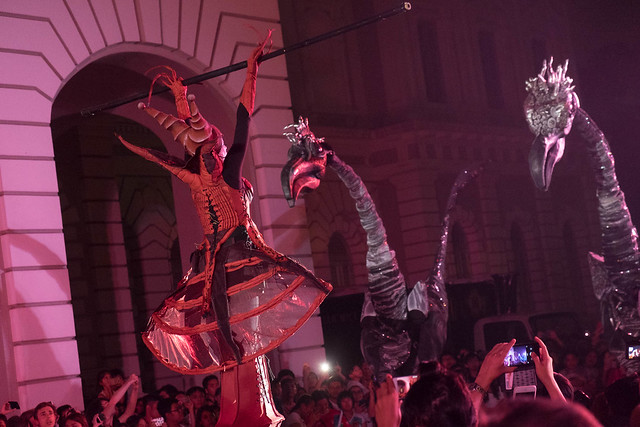 The evil queen summons the dinosaurs in the performance of Invasion, by Close Act from The Netherlands.

The ninth Singapore Night Festival came to an end with performances by the aptly-named street theatre company, Close Act, from the Netherlands. They gave 2 different performances on last Friday and Saturday to a huge crowd at both Armenian Street and the front lawn of the Singapore National Museum.

Close Act’s first performance took place along Armenian Street, featuring dancers and drummers on stilts, as well as fire performers with hand flares. The street parade features high-energy drum beats from the high-stilted drummers, which provided the backdrop for the dancers with “butterfly wings”, who are also on stilts.

The performance is said to “honour and welcome positive spirits to this world”. Hmm, with the Chinese Hungry Ghost Festival’s ghosts already roaming around, not sure if this is a good thing! 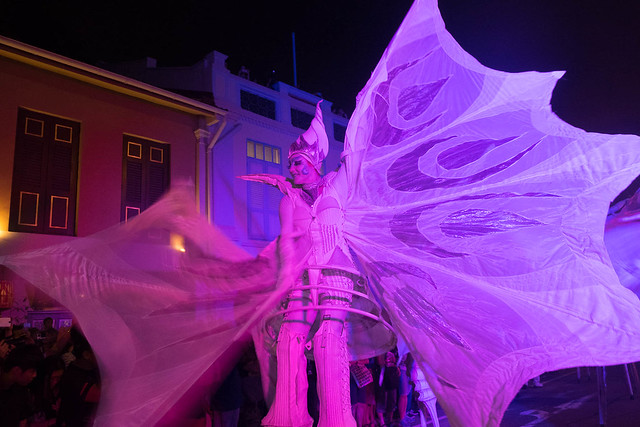 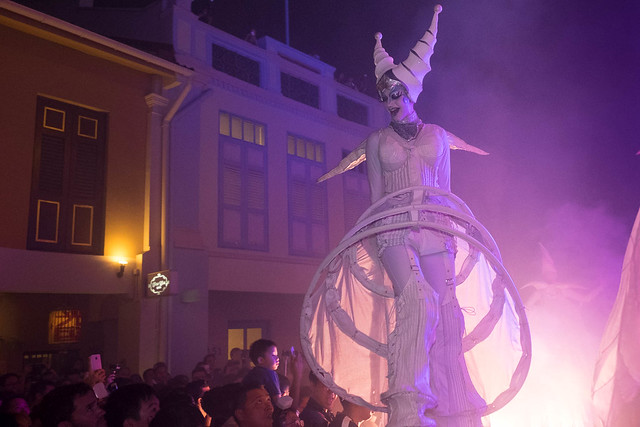 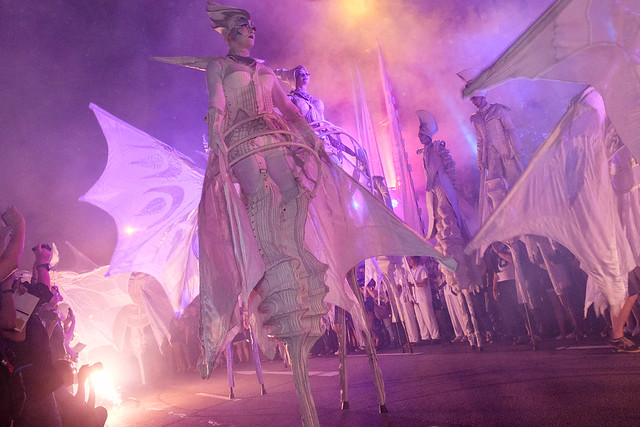 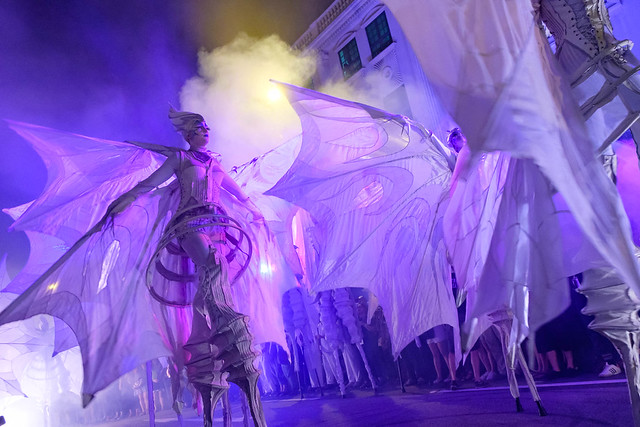 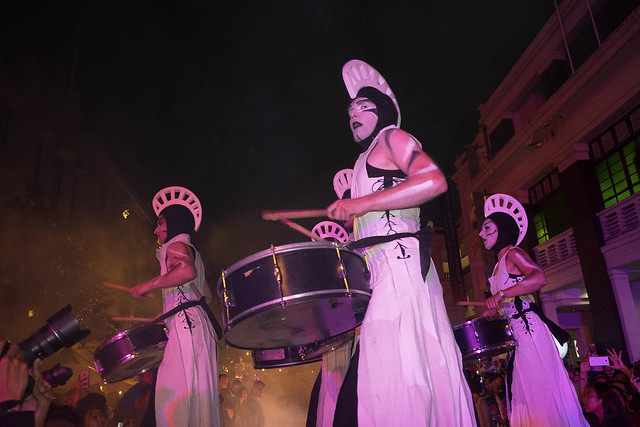 Drummers on stilts providing a rhythm to the act.

The highlight of the last two nights of the Singapore Night Festival is the act titled “Invasion”. This is a grand spectacle which took place at the front lawn of the National Museum of Singapore. Like Let’s Celebrate, it also featured performers on stilts. Dinosaurs and prehistoric birds, as well as an evil queen also make an appearance in the act, immersing the audience in a mythical world. With the performers mingling among some sections of the audience, it makes for a very immersive experience, backed by a tribal-themed sound track befitting of the act’s mythical and prehistoric nature. I am assuming the actor in white represents the good, while the other one in red represents evil. She does somewhat bears a resemblance to the evil queen in the film Maleficent. 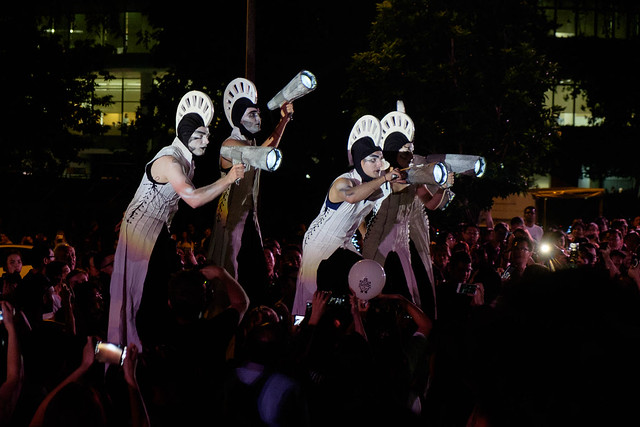 The searchers. What were they looking for? 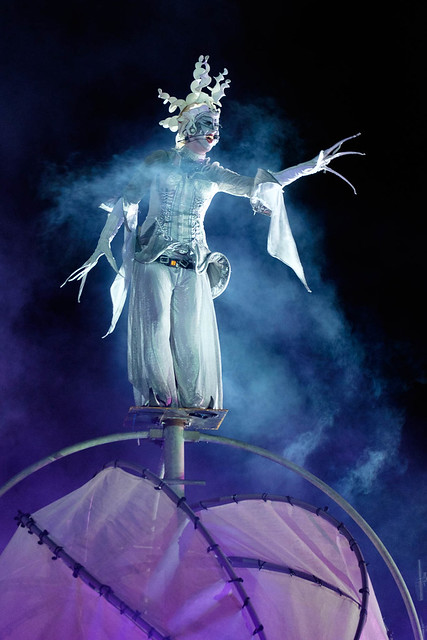 One of the actors of Invasion, standing on a lighted sphere. 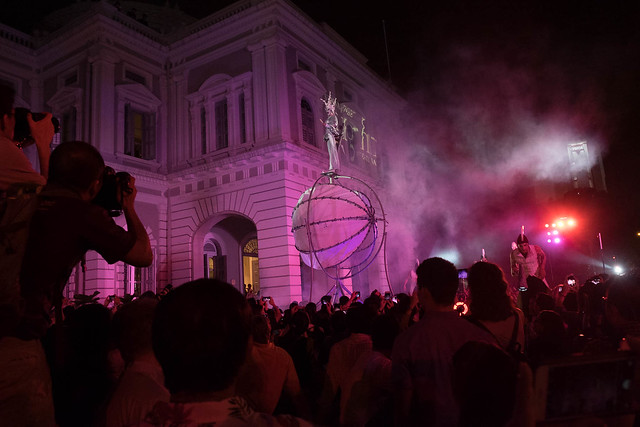 The massive crowd in front of the National Museum of Singapore enjoying the show. 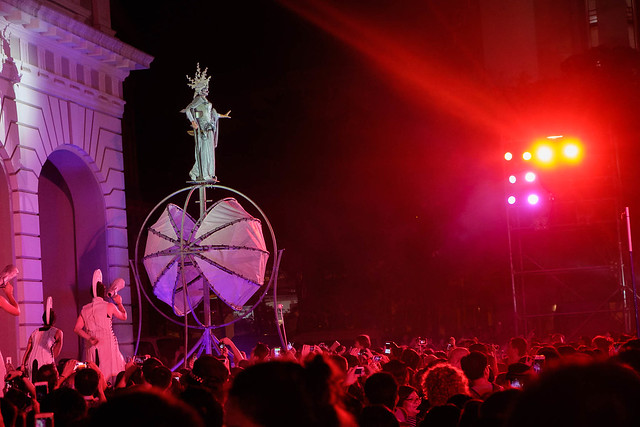 Performer and audience in front of the National Museum of Singapore 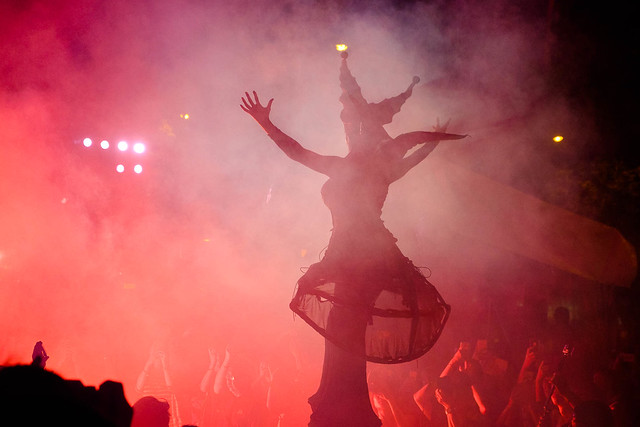 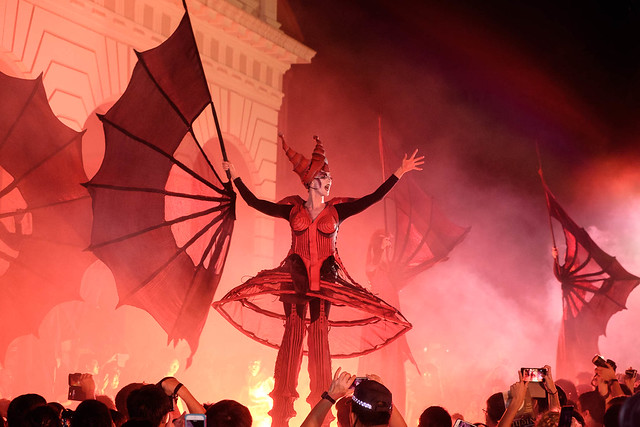 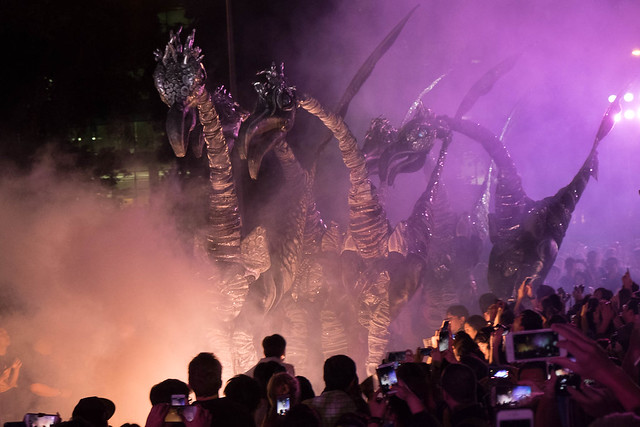 What does one do during a dinosaur invasion? Take photos of course! 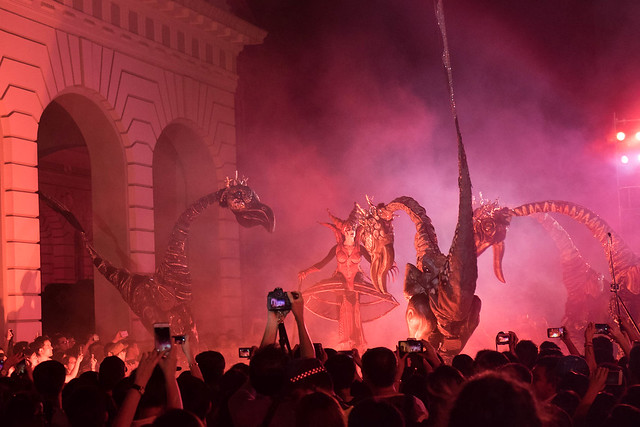 Dinosaurs and the evil queen who summoned them. 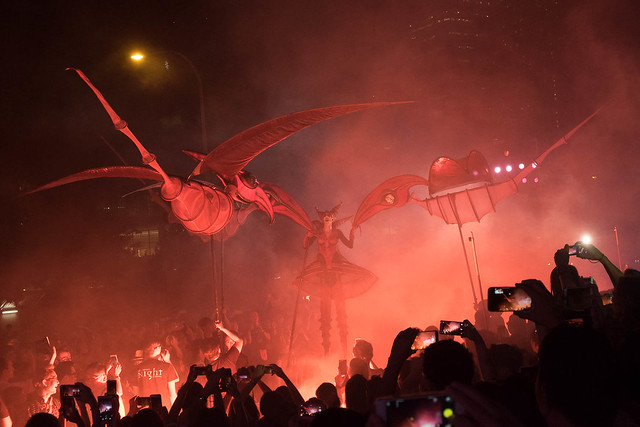 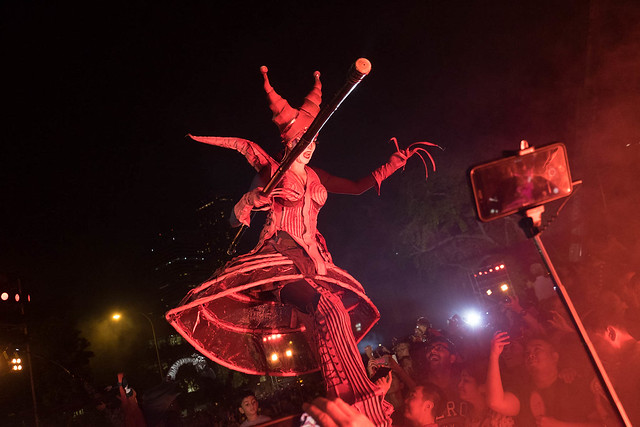 The evil queen has an issue with selfie sticks! Kidding, but I secretly wished she’d accidentally knock that stick off. 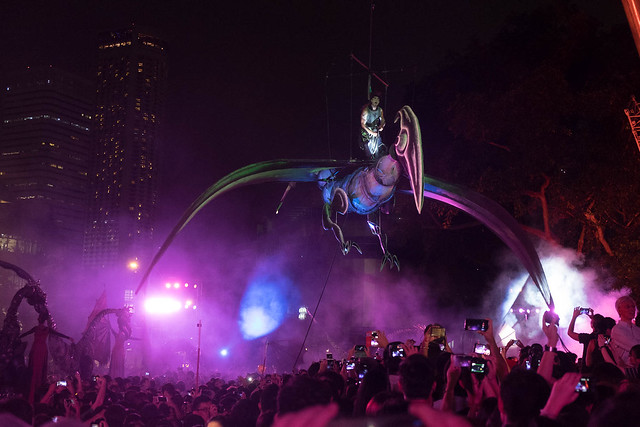 A Pterosaur-like creature soars above the audience during the finale of Invasion by Close Act. 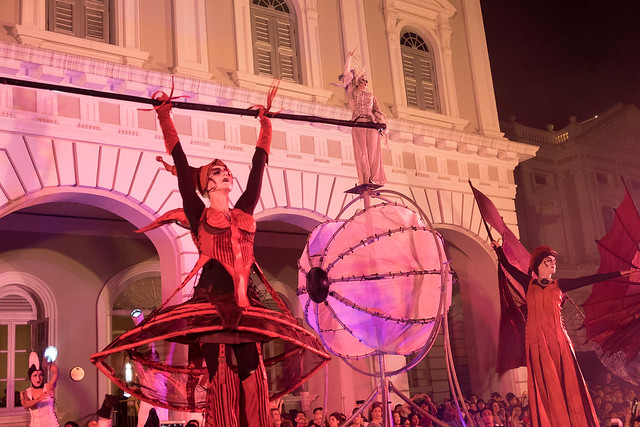 This installation by Litewerkz, a group of students from the Singapore University of Technology and Design. The installation somewhat reminds me of a similar one over at the ArtScience Museum titled Space, a part of the Future Worlds exhibition. #ShowerThoughts features colourful LEDs suspended in a mirror room, giving a kaleidoscopic effect to the viewers. It’s a modern day translation of the inspirational moments we often experience when showering.

On weekends, the queues to the rather small installation can be up to two hours, so I decided to check it out during a weekday night, where there are far less people. Visitors are limited to 3 minutes within the installation. 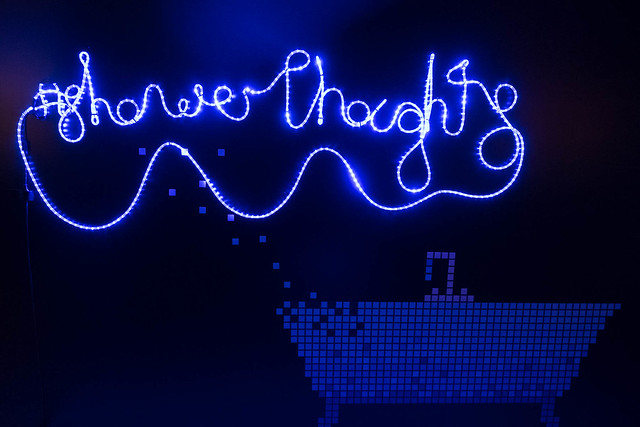 LED artwork at the entrance to the installation. 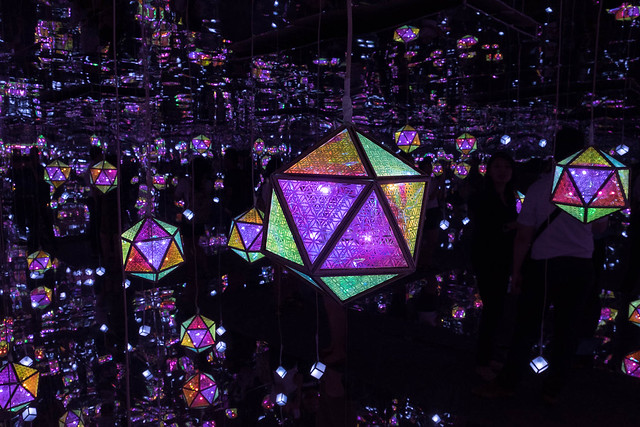 #ShowerThoughts by LiteWerkz from SUTD, Singapore 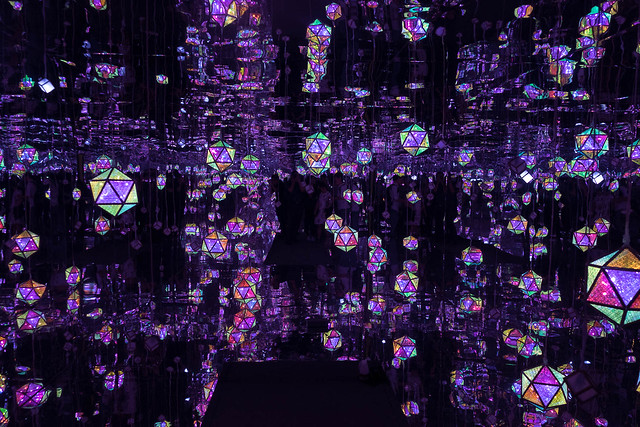 #ShowerThoughts by LiteWerkz from SUTD (Singapore)

In Japanese, Komorebi loosely translates to “sunlight filtering through the leaves of trees” and this installation by Lighting Planners Association attempts to achieve it through light shining through perforated holes on large rolls of paper. 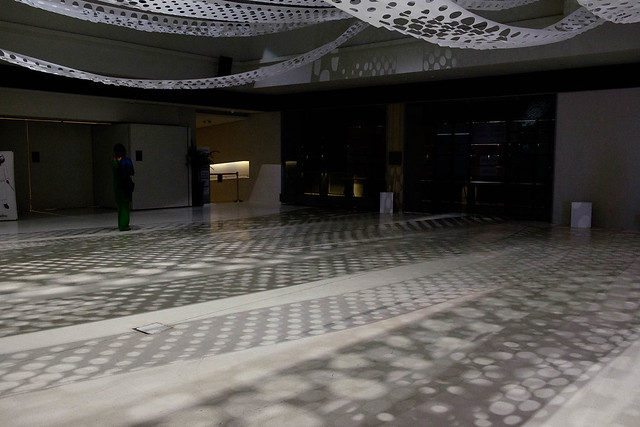 The Singapore Night Festival has ended its run this year. With the tenth edition coming next year, I am sure it’s going to be more exciting. I am definitely looking forward to it!