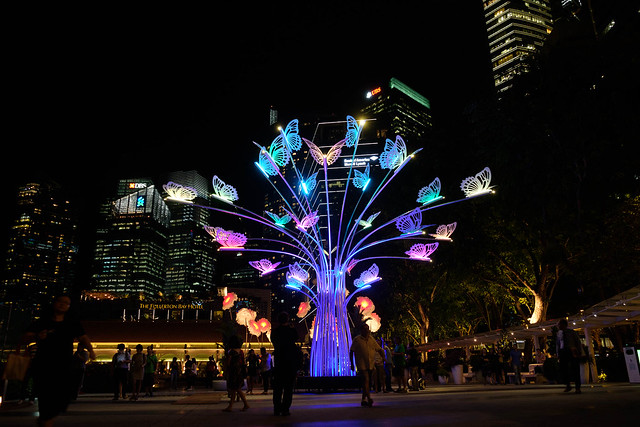 The Colourful Garden of Light by TILT (France)

i Light Marina Bay, Asia’s only sustainable light art festival is back for its fifth round. Starting from this year, the popular festival will now be an yearly affair, instead of bi-yearly as with the previous rounds.

Held from 3 Mar to 26 Mar, this year’s i Light features 20 sustainable light art installations around the Marina Bay area. The theme from this year is “Light and Nature”. Along with a few other local bloggers, I was invited by the Urban Redevelopment Authority (URA) for a special media preview yesterday (1 Mar 2017).

Here are a few of the highlights of the installations.

The installation features many parallel bands of colourful nylon ribbon which flutters in the wind. Lit by ultraviolet (UV) light, the ribbons come to live when darkness falls with their vibrant colours. 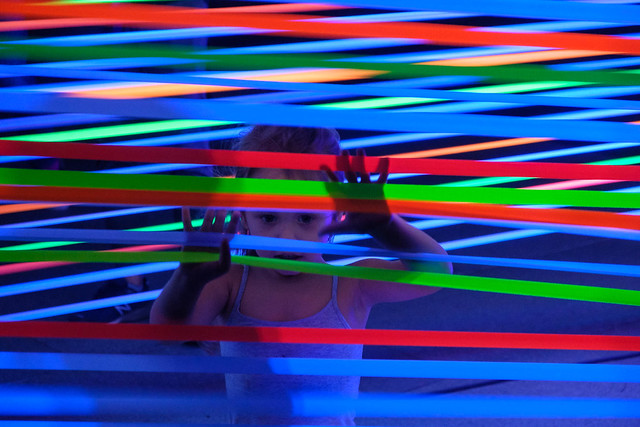 A kid play among the colourful ribbons 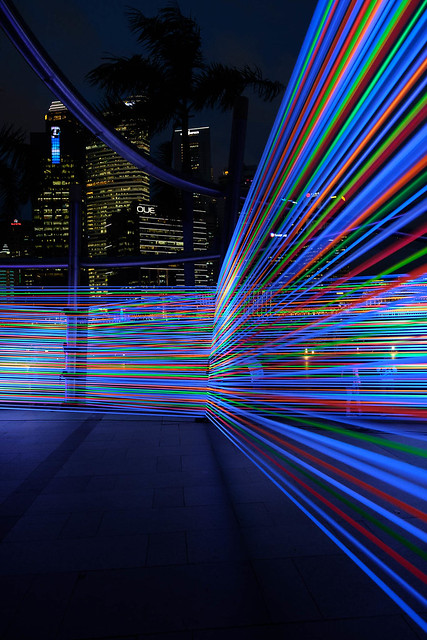 Horizontal Interference, with part of the Singapore Skyline in the background.

Using motion sensors, Social Sparkles uses LEDs to simulate fireflies flying directly above the visitor. They come alive, lighting up their virtual tail as soon as you approach. Just as quickly, they disappear once you leave. The swirling “fireflies” make for some fun long-exposure photography, where their paths leave circles of light in the final photo. 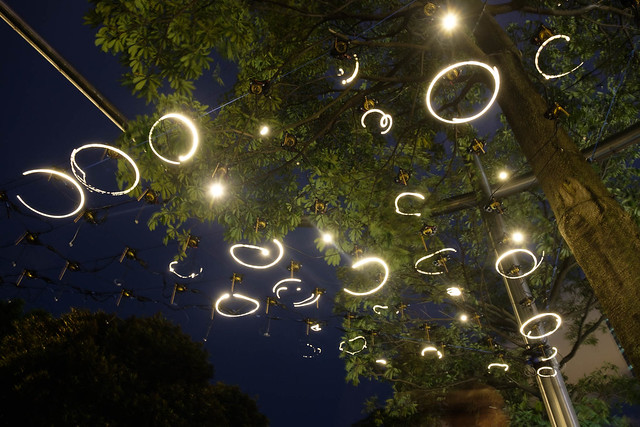 A field of flowers lit by solar-powered LED—this is the highlight of this installation by local artist Yun. From $5 and above, visitors can also “adopt” the flowers to keep them after the festival. Proceeds will go to Garden City Fund, a charity that runs sustainable projects in Singapore. 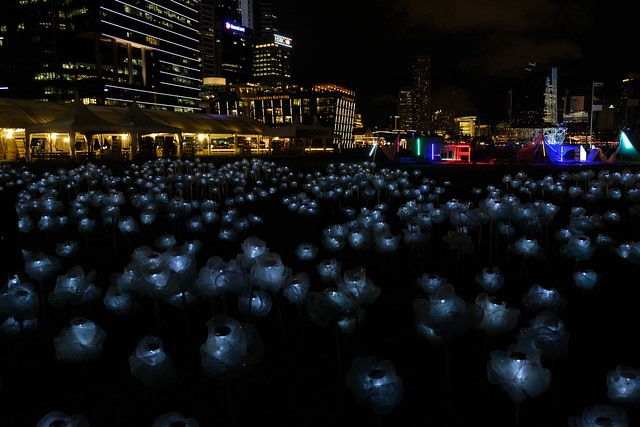 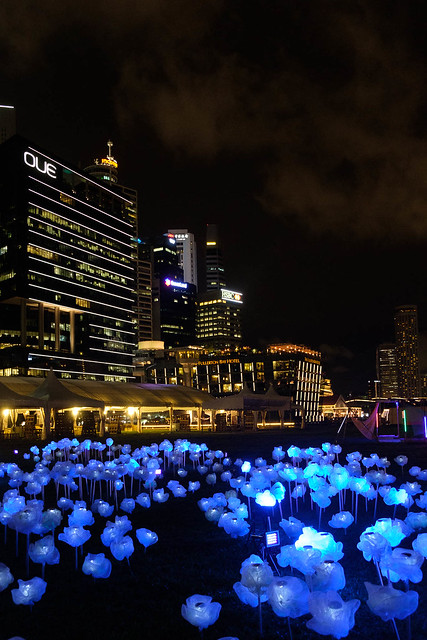 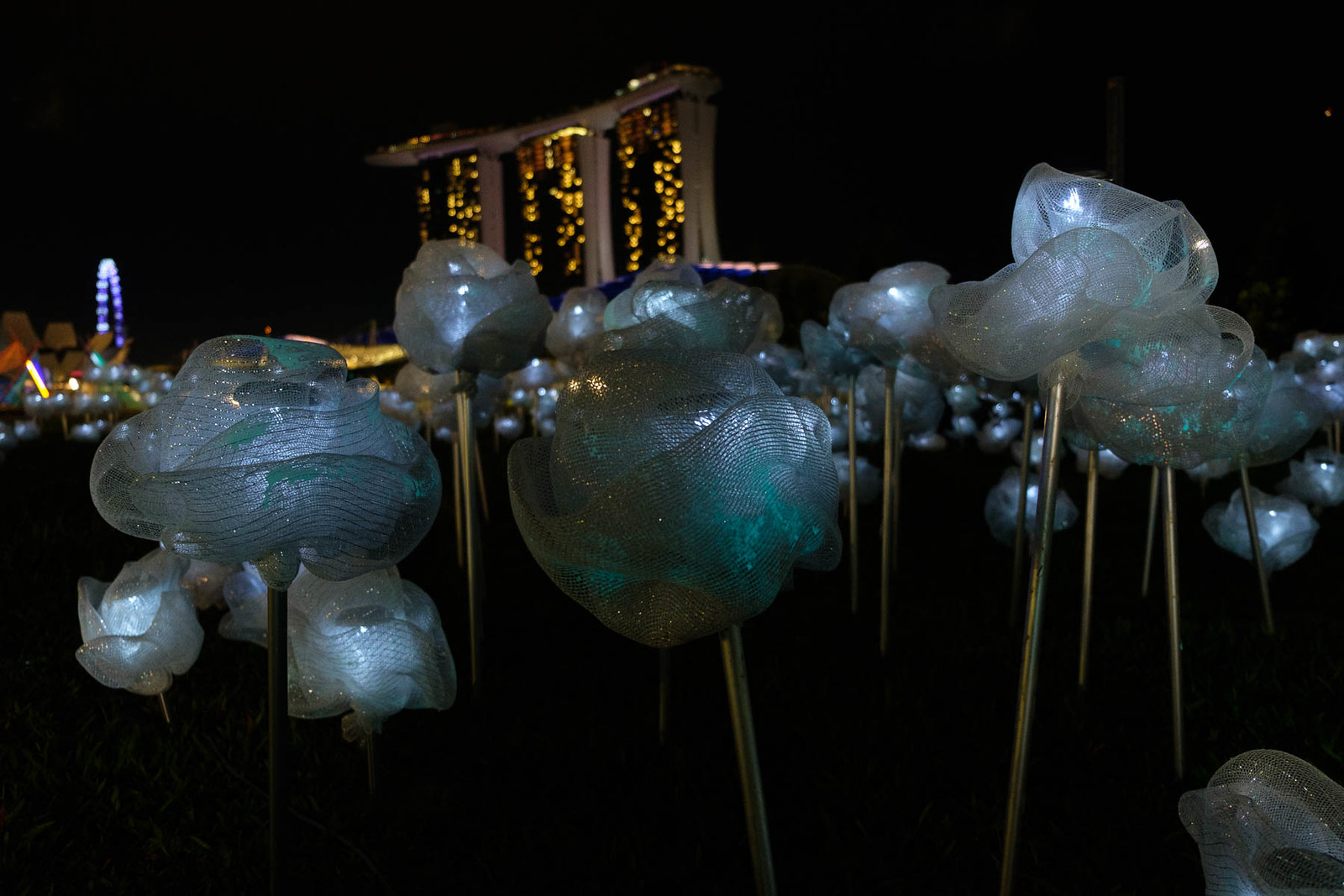 Moonflower by Yun (Singapore) with the Marina Bay Sands in the background.

4. The Colourful Garden of Light by TILT (France)

Clifford Square comes alive with these colourful flowers and butterflies and their ever-changing colours. 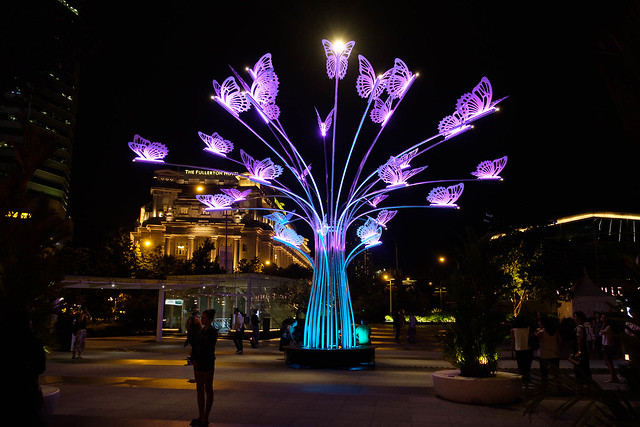 Butterfies in the Colourful Garden of Light by TILT (France) 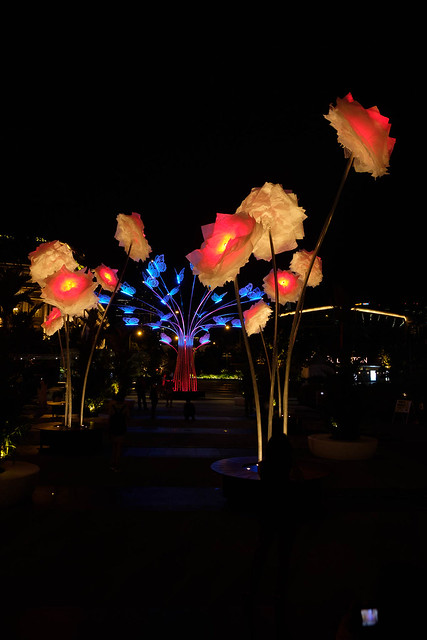 A Colourful Garden of Light by TILT (France)

The media preview also took us on a boat cruise in Marina Bay, giving us a stunning view of the skyline, as well as a different perspective of the various installations.

5. The Body of the Sea by Danny Rose (France)

If memory serves me well, this is probably the 3rd time the Merlion is lit up with projection, the other two being the i Light in 2012, and the 40th birthday of the Merlion. In this installation, French artist Danny Rose adorns the Merlion with a coral dress, a surreal skin of fish, shells and other marine creatures via 3D Mapping Projection. 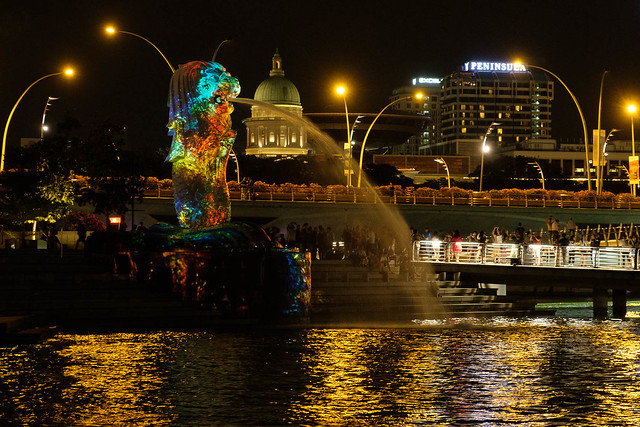 The blank white surface of the “petals” of the ArtScience Museum next to the Marina Bay Sands serves as the perfect canvas for video projection works. Not unsurprisingly, all the previous i Light Marina Bay installations, including this year’s, feature a video projection piece. 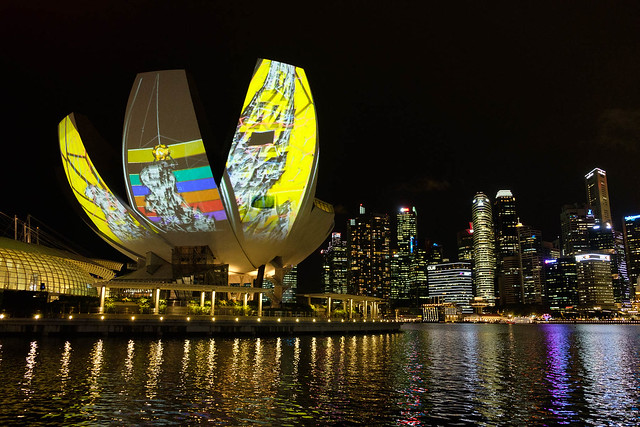 i Light Marina Bay 2017 will be held from 3 March to 26 March at the Marina Bay area. For more information, please visit the official website.

This entry was posted in Photography and tagged i Light, marina bay, Singapore. Bookmark the permalink.