Iceland—The land of fire and ice, with its stunning and largely untouched landscape, is a dream destination for many landscape photographers, myself included. It is also featured in several movies and TV shows like The Secret Life of Walter Mitty, Game of Thrones and even the latest Star Wars: A Force Awakens!

Of course, Iceland is one of the few countries known to be able to see the Aurora Borealis, otherwise known as the Northern Lights, which never fail to awe. I’ve been wanting to see the lights ever since I read about them as a kid, and watching videos of them lighting up the night sky.

In November 2015, I finally had the chance to visit Iceland and check it off my bucket list. It was supposed to be last year, but due to unforeseen circumstances, it was postponed to this year.

One of our agendas of the trip is, of course, to view the magnificent aurora borealis. Our journey took us on a flight from Singapore to Amsterdam, and then to Keflavik International Airport in Iceland. Thereafter it was a taxi trip to our apartment where we rested for the night after having dinner.

The next morning, we took taxis to Reykjavik domestic airport. But being the kiasu (afraid to lose out) Singaporeans that we are, we arrived way too early, before the airport even opened. So, we are left freezing out in the cold while waiting for the airport to open.

A short flight later, we are at Akureyri, Northern Iceland. It’s a long drive to our guest house at Vogafjós Guesthouse, and we actually stopped by a convenience store near Goðafoss without knowing it, till we checked with the counter staff what the nearby waterfall was.

It wasn’t dark yet when we arrived at Vogafjós Guesthouse, so we did a recce for a location to shoot the aurora borealis from, but didn’t find a suitable spot. We ended up shooting near the guesthouse’s restaurant and cow shed.

As the sky darken, someone in the group noticed a green wisp, almost invisible to the naked eye in the twilight. But it’s very visible when viewed from my camera’s live view display. We were awed, and quickly setup our tripods and cameras to capture the magnificent sight that followed.

The aurora is the result of the collisions between the sun’s charged particles and the gaseous particles in the earth’s atmosphere. The types of gas particles colliding determines the colour, with the most common being the greenish hue produced by oxygen molecules. 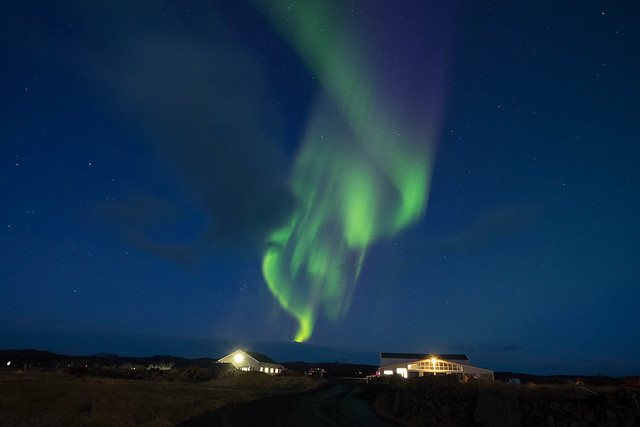 This is also the first time in my life to see the Big Dipper. You can see it in the shot below, just under the green wisp of the aurora on the top half. 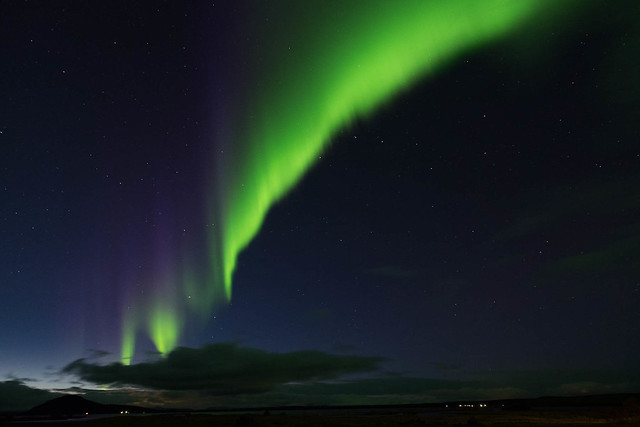 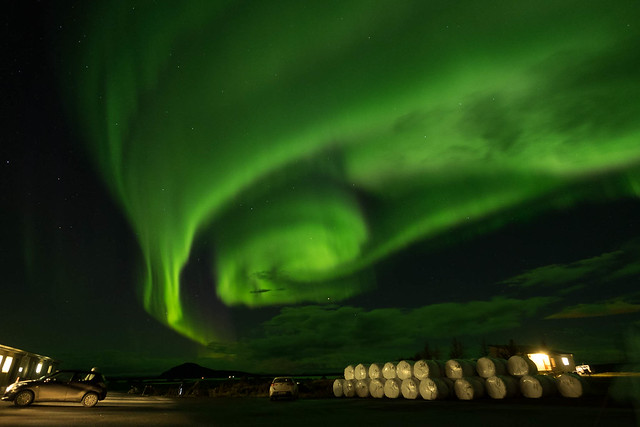 The feeling of seeing the aurora the first time in one’s life is magical and exciting. A Chinese tourist asked me if there’ll be Northern Lights that evening, I pointed it out to here and she excitedly squealed and ran into the restaurant to get all her friends!

We wrapped up after a couple of hours to have dinner and went back to the guesthouse, where I took the opportunity to get a star trail shot. Unfortunately, the clouds came in after about 20 exposures.

The next day, we went to the Goðafoss, one of Iceland’s most famous waterfalls.

It was kind of cloudy that day, and we thought that chances of seeing the aurora will be slim. We couldn’t believe our luck when we spotted it once again.

The lights eventually made their way to above the falls.

I decided to do a time lapse this time round, and the shot above is one of the frames. Here’s the result, compiled from 160+ frames.≠

Just before leaving, I took another shot from the car park. Truly spectacular. Photos and videos don’t do it justice. 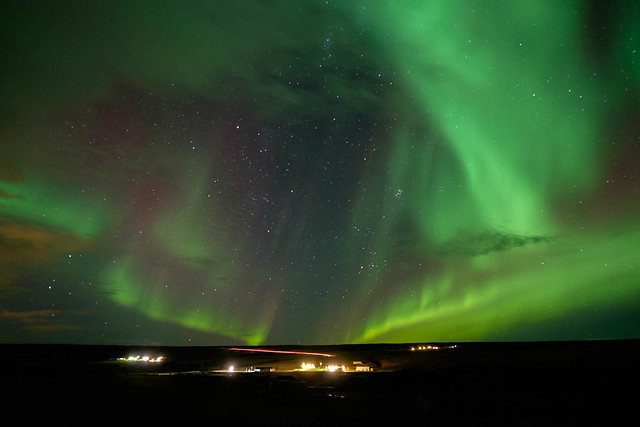 We must have been really lucky, as we get to see the aurora again, on our third night in Northern Iceland. On this evening, we are at Lake Mývatn, which was frozen when we arrived. There were quite a number of meteors that evening, which we caught on our photos. 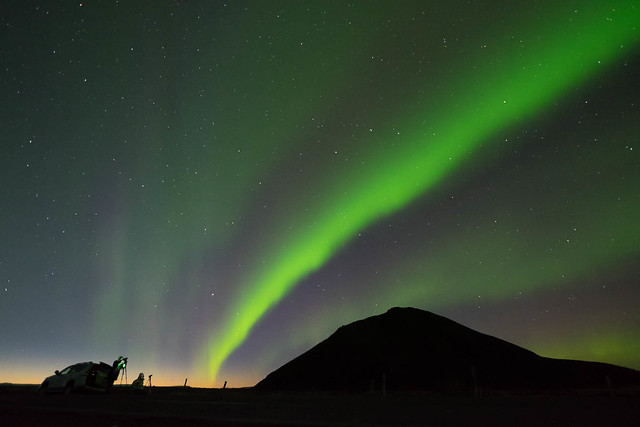 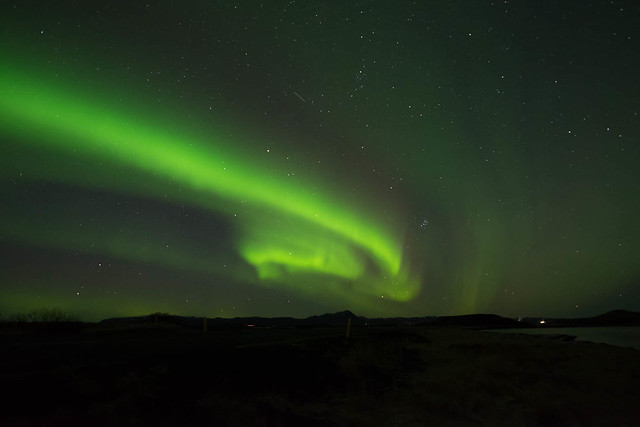 Sadly, this was to be the last time we ever met her during our trip. But we are very happy that we managed to catch her so many times.