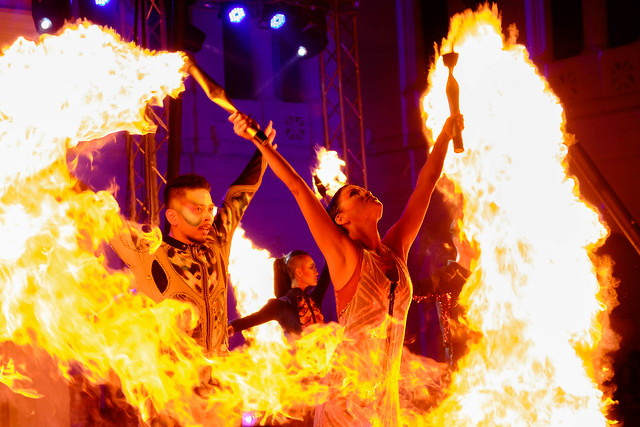 Now into it’s 8th year, the Singapore Night Festival is here again. With a theme of “Glitz and Glamour”, and in conjunction with Singapore’s golden jubilee, the festival showcases an ensemble of world-class entertainment by both local and foreign artists and performers. Here are some of the performances which I managed to attend and shoot.

The opening shot of this post is from Act II of a performance by local fire performance group, Starlight Alchemy. The group has been a feature of the past few Night Festivals and has been a big crowd favorite with their exciting fire performances. This year, they staged a 3-part story of Apollo from the world of Ethereal Light, and Nuri from the world of Eternal Flame, told through a combination of dance, fire and LED performances. Bringing technology into their performance, they also utilized what I think are Bluetooth/Wifi-controlled LED sticks and props, which mandated the audience to turn off the Bluetooth/Wifi features of their phones and tablets lest they interfere with the performance. Here are a few more shots from their performance. Unfortunately, this was their last performance and they won’t be back for Part II of the festival this weekend. 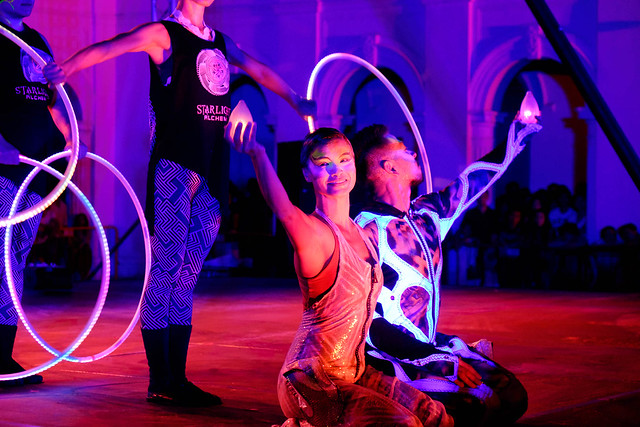 The main characters of the show—Nuri and Apollo 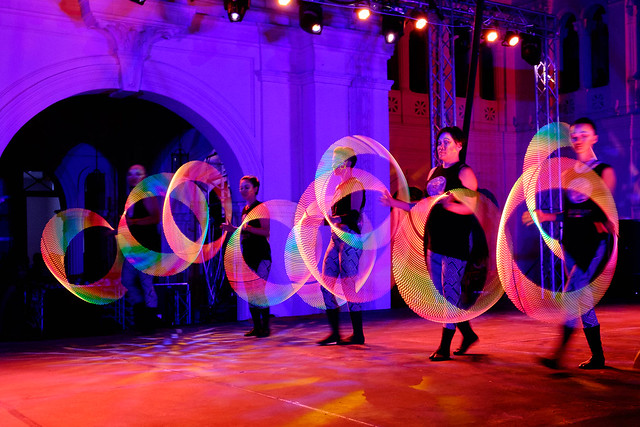 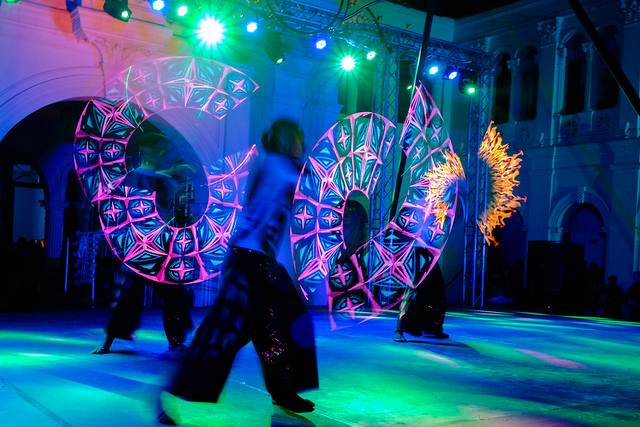 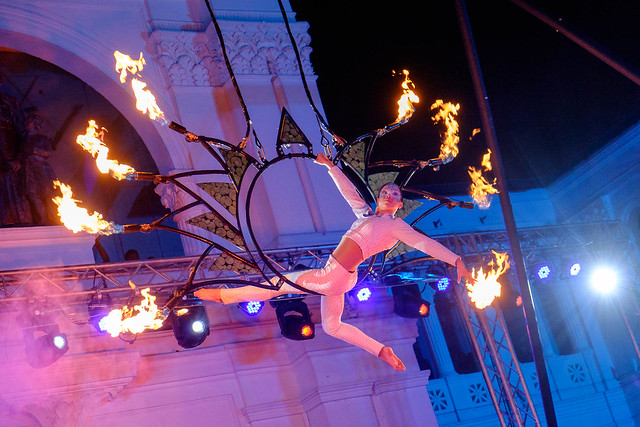 A scene from Act III of Alchemy, by Starlight Alchemy

Part of the Night Lights segment of the festival, light projections are also a favorite among the crowd. This year, the festival features The Anooki Celebrate Singapore, a light projection installation on the façade on the National Museum of Singapore. The Anooki (Anook and Nooki) are the “world’s smallest Inuits” run amok the façade as they attempt to celebrate Singapore’s 50th birthday. They are extremely cute, and the sounds they made reminded me of the minions from the Despicable Me movies. 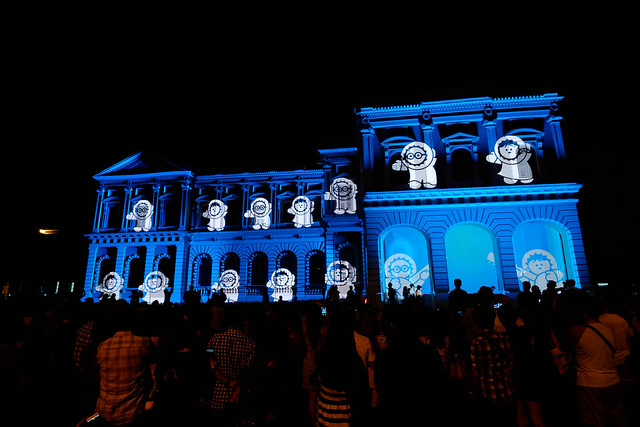 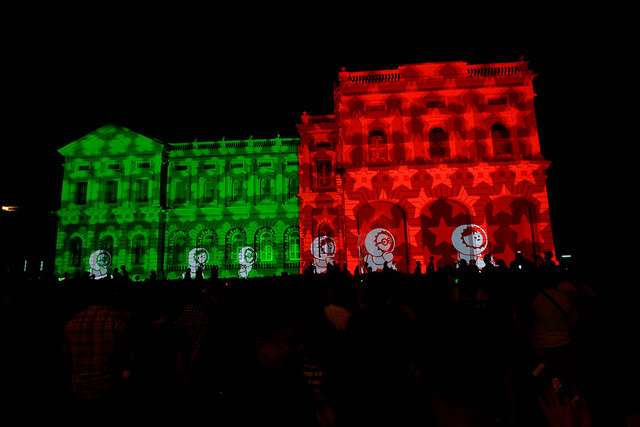 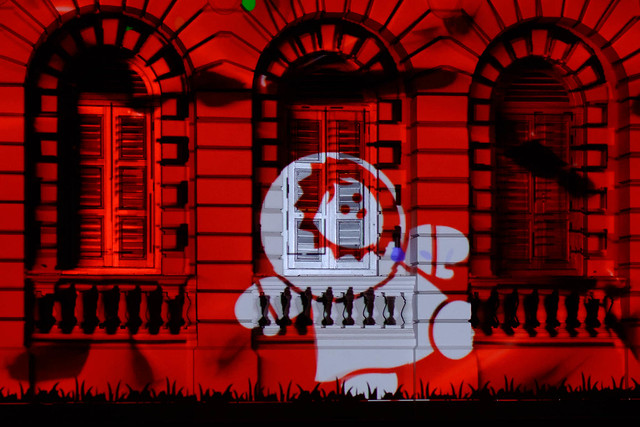 “Watching” the Anooki is one of the birds from La Désir Et La Menance. They are a collection of three wire sculptures of birds created by French sculptor Cedric Le Borgne and sits on the branches of the old banyan tree in front of the National Museum of Singapore. 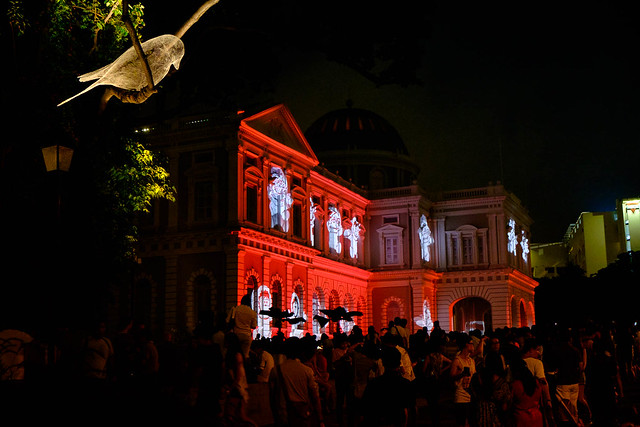 Banging on LED-lit drums are the musicians from World Beaters LLP in their performance titled Spark!. With their high-impact drumming, dazzling costumes and the colorful LED-lit drums, the performers appear to have a Pied Piper-esque effect on the audience, who followed them as they make their way from SMU Green to Armenian Street. 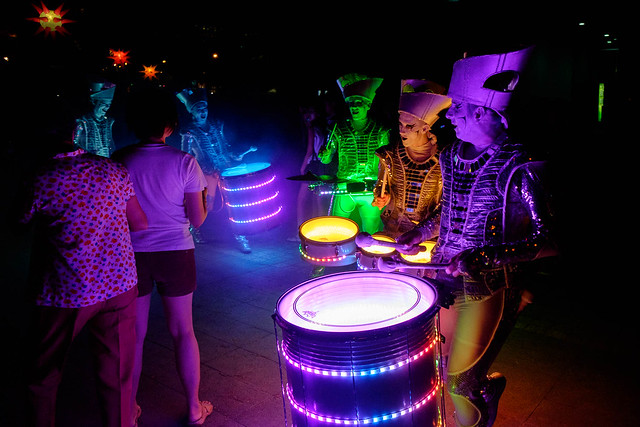 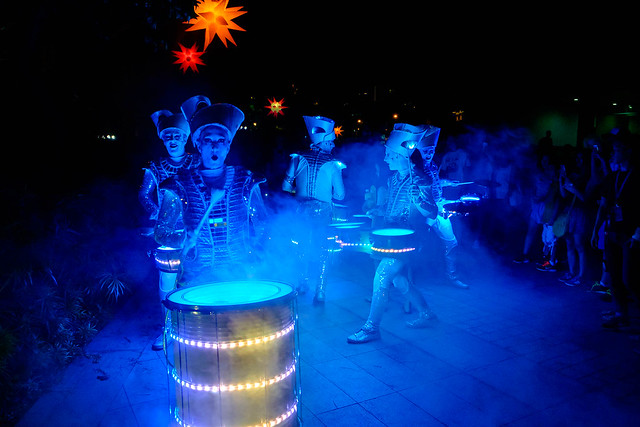 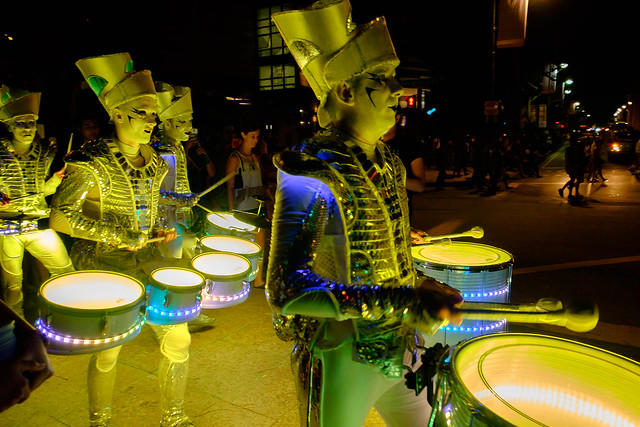 Made from metal wires hand-bent into the form a typical Amsterdam-style canal building, this is a 12m-wide installation by Dutch artist Ralf Westerhof. The sculpture was declared the public favourite the 2014 Amsterdam Light Festival. 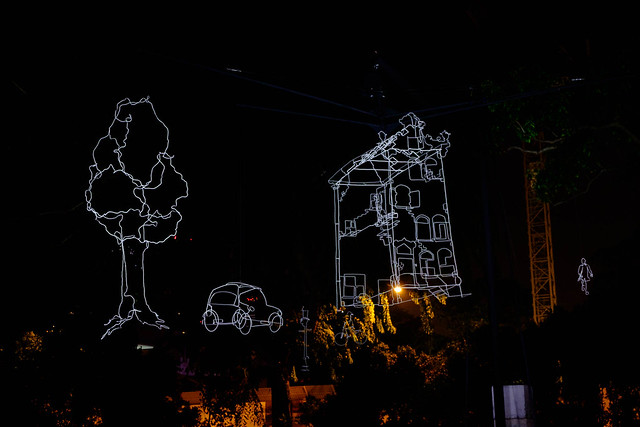 The Singapore Night Festival 2015 will continue this Friday and Saturday (28–29 Aug) from 7pm to 2am. For more information, check out the official website. You can also see more of my photos of the festival on my Flickr page.